The "traditional arguments" are the arguments you study in this course: The philosophers who criticise these arguments include: David Hume, Immanuel Kant, Richard Dawkins, Bertrand Russell and J.L. Mackie himself.
In the face of these criticisms, some religious believers switch to a different justification for their faith: perhaps religious experience. Mackie calls this "non-rational" because these arguments are based on personal testimony rather than physical evidence.
Analysis
Rather than attack the evidence for belief in God, Mackie proposes to attack the belief itself. He aims to show that the idea of God is "positively irrational" and "inconsistent".
Discussion
Mackie is hinting that religious believers have been defeated by criticisms of the traditional arguments for God and have, in a rather slippery way, shifted to basing their belief on religious experiences and intuitions instead of a posteriori evidence. Is this a fair criticism?

Mackie brings in the Problem of Evil & Suffering and explains why it is important. He doesn't mention the inconsistent triad, but he does refer to "evil", "omnipotent" and "wholly good", which are the three corners of the triad. He assumes his readers know what the problem is.
Analysis

Mackie argues that only the logical aspect of the problem matters to him. Religious believers do not solve the logical problem by focusing on the scientific or practical problems instead. If religious believers deliberately focus on the scientific/practical aspects in order to avoid answering the logical problem (and Mackie is perhaps hinting that they do), then this is a fallacy called ﻿Moving the Goalposts﻿.
Discussion
Are these 3 aspects of the problem as distinct as Mackie makes out? After all, if we will learn more about God's nature and plans at the Eschaton, then it would be reasonable to 'reserve judgment' about God until that time. This viewpoint is similar to John Hick's Eschatological Verification. Similarly, discussing the problem of evil without trying to do anything about it is very perverse if the world is really a "vale of soul-making" as John Hick claims.

Mackie outlines the Problem of Evil & Suffering and the problem it creates for theists (believers in the traditional God of Christianity, Judaism and Islam).
Analysis
There are other forms of the problem of evil beside Mackie's. The Evidential Problem of Evil & Suffering focuses on the excessive amount of evil in the world, rather than the fact of its existence.
Discussion
Mackie's focus on what he calls "ordinary theism" reveals a Western bias that is found in a lot of philosophy of religion. Sikhism (30 million believers) and Hinduism (over a billion) are world religions with a different conception of God. For instance, they believe in reincarnation and karma, so a lot of suffering is brought on by people's own behaviour in this or an earlier lifetime. Some schools of Hinduism do not believe that God (Brahman) is omnipotent or omnibenevolent and this is also a belief in Buddhism (half a billion believers).

Still, at least Mackie acknowledges that there are other religious views out there, even if he only mentions them in passing.

Mackie introduces two important refinements into his argument: a clearer definition of good/evil and of omnipotence.
Analysis
Mackie defines good as being "opposed to evil" and seeks to "eliminate evil as far as it can". Most religious people would agree with this refinement, but it is an important one. Without it, an omnibenevolent God might just want to create more goodness in the world (more hospitals, more orphanages, more charitable donations) and not care how much evil exists alongside the goodness.

The idea that "there are no limits to what an omnipotent thing can do" is also accepted by most religious believers. This seems to be part of the definition of "omnipotence".

These two refinements make it "incompatible" for "a good omnipotent thing" and evil to exist together.

Mackie isn't adding anything to the Problem of Evil & Suffering. He's just 'unpacking' some of the terms and defining them clearly to show their implications.
Discussion
The idea of good and evil being opposed is uncontroversial. The definition of omnipotence is much less agreed upon.

God can do all things that are possible - Thomas Aquinas

This means that God can't perform logically impossible acts, like drawing a 4-sided triangle. This isn't because God lacks the power but because a logical impossibility isn't really a 'thing' at all. If removing evil is logically impossible, then omnipotence cannot do it.
According to this view, omnipotence means being the most powerful thing there is, but not having "unlimited" power.

Nonetheless, many religious believers do believe God has unlimited power and would agree with Mackie's definition.

Mackie outlines the obvious ways a religious believer might avoid the Problem of Evil & Suffering by adopting less extreme beliefs. He calls these the "adequate solutions". They are "adequate" because they avoid the logical problem of evil.
Analysis
Mackie explain how the problem of evil can be removed:
These positions are "adequate solutions" because they make the triad consistent. A non-omnibenevolent God might not want to remove evil: perhaps it is part of his plan or a side-effect that he is content to put up with. A non-omnipotent God might wish to remove evil but not be able to - at least, not yet. If evil and goodness aren't opposed, then a good God could achieve his aims without having to remove evil.
If evil doesn't really exist, then we are misinterpreting the world in a pretty major way.
Discussion
There are religious people who take these views: 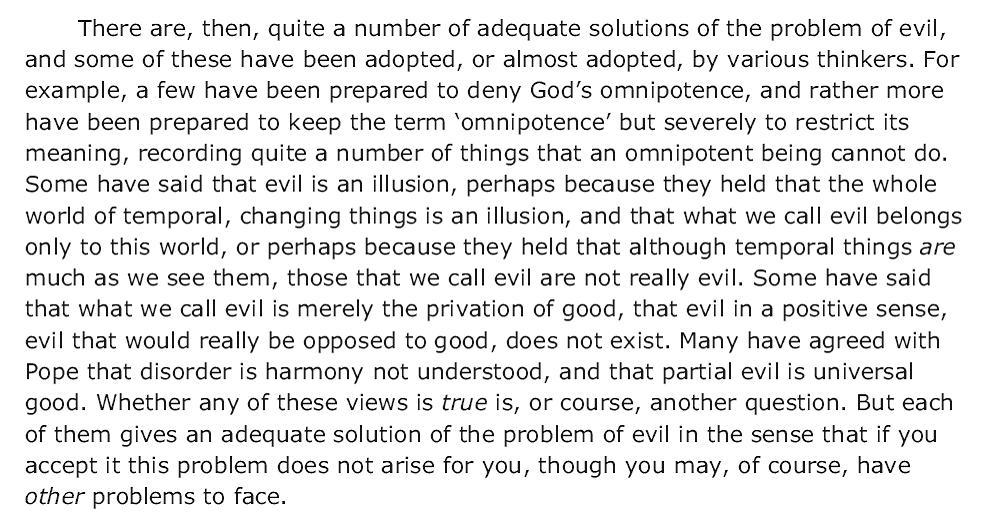 Mackie goes into detail on some of these "adequate solutions" and uses a quote from Alexander Pope (the famous poet - not the Pope) to sum it all up
Analysis
Mackie starts off with theists who deny God's omnipotence - or rather, redefine omnipotence as something more limiting, including "quite a number of things that an omnipotent being cannot do". Two of these thinkers were introduced earlier by me: Thomas Aquinas and Charles Hartshorne.
Next he considers the view that"evil is an illusion" and he looks at two views in particular:
Mackie finishes off saying that, if you adopt these "adequate solutions" you won't suffer from the logical problem of evil, but "you may have other problems to face". Some of these problems he is going to consider next.
Discussion
Charles Hartshorne and the Process Theologians are a bit unusual by the standards of normal religious belief, but Augustine of Hippo is a founding doctor of the Roman Catholic Church and his views on privatio boni were taken up by Thomas Aquinas, who pretty much defines Catholicism (1.2 billion believers). You have to wonder, if Mackie is dismissing their ideas as "adequate solutions", just whose religious belief is he really arguing with?
The "other problems" Mackie refers to would make a good discussion.

Mackie explains some problems with the "adequate solutions" he has set out. He accuses religious people who adopt these views of being inconsistent or perhaps insincere. He suspects that, despite what they say, they do in fact believe in omnipotence and evil.
Analysis
Mackie suspects that religious believers who admit God's omnipotence is limited only do this to "get out of" the logical problem of evil. "In other contexts" they hold to the standard view of omnipotence. Mackie may be thinking that these believers still read the Bible (and passages like Matthew 19:26) and believe that "with God all things are possible"; they still pray to God and hope for miracles, which they wouldn't do if God's power really was limited. In other words, they are being a bit dishonest with themselves.
He criticises believers who think that evil is an illusion or a privatio boni because he points out that they tend to think that illusions are evil or privation is evil. So, really, they still think that evil exists: they haven't escaped from the logical problem of evil at all.

Mackie makes a comparison with the Naturalistic Fallacy in Ethics. The Naturalistic Fallacy is a mistaken attempt to explain ethics in terms of something natural - like evolution or biology. Some critics of traditional ethics do this because they want to base their idea of how to behave on something other than 'goodness'.  The flaw is that the person still smuggles in the idea that it's good to evolve or follow your biology. In other words, they haven't really got rid of the idea of 'goodness' at all. It's the same with people who reject the existence of evil. They still smuggle in the idea that some things are evil.
Mackie finishes off with some more analysis of Pope's little poem, but students don't need to worry about this. He's making the same point, that even when people don't call evil "evil", they still think of it as evil.
Discussion
Mackie's arguments have some force and could be discussed further. Would a religion like Christianity have "taken off" the way it did, if it taught people that God was too weak to do anything about evil, or that evil wasn't really real? Many people who converted to Christianity were persecuted and executed for their faith. They did this because they believed in an all-powerful and utterly moral God who was more important to them than the Roman Empire they lived in. There's a sense that religious philosophers who "water down" God's characteristics or downplay the evil in the world don't have much in common with those first Christian saints and martyrs. They probably don't have much in common with ordinary Christians who struggle with temptation, oppression and hardship in the world today.

Analysis
Mackie concludes this section by revealing that he doesn't regard the "adequate solutions" as adequate at all - he thinks they are "unsatisfactory, inconsistent solutions". He thinks that, while believers who take these positions claim to reject one of the propositions of his inconsistent triad (such as God's goodness or omnipotence or the existence of real evil), they do so only in a "half-hearted or temporary" way. In fact, they "covertly" (secretly) reassert the proposition when they put their religion into practice.
Discussion
Mackie seems to regard these religious believers as either hypocrites or fools. Let's remind ourselves who he's talking about here: 1.2 billion Catholics, 1 billion Hindus, half a billion Buddhists and 30 million Sikhs, plus however many Process Theology believers there are out there.
Continue with the extract
Powered by