non-rational, non-sensory experience or feeling whose primary and immediate object is outside the self - Rudolf Otto

Some philosophers regard the numinous as a feature of all religious experience, but some classify it as a ‘type’ in its own right and contrast it with mystical experience, where the experient feels one-ness with the divine rather than separation from it.

Otto suggests that religion derives from this experience of something utterly separate from humanity. Otto claimed that many of the visions recorded in the Bible, such as Moses’ encounter with the burning bush, are experience of the numinous. He describes the numinous with a Latin phrase:

this fear is due to the in-compatibility between man's egotism and the divine purity, between man's self-aggravated separateness and the infinity of God - Aldous Huxley

In the presence of the numinous, humans have characteristic responses:

Stupor: mysterium tremendum is unlike anything that we have encountered or ever will encounter; the experient feels a "blank wonder, an astonishment that strikes us dumb, amazement absolute."
The shudder: The experient is "held speechless, trembles inwardly to the farthest fibre of its being ... the mysterious is beginning to loom before the mind, to touch the feelings."
Creature-consciousness and the simultaneous experiencing of the self as nothing: We become awareness of ourselves as contingent creatures, creatures who barely exist at all. We feel ourselves to be utterly unlike the numen and utterly inferior; "a piercing acuteness... accompanied by the most uncompromising judgment of self-depreciation, a judgment passed, ... upon his very existence as creature before that which is supreme above all creatures."
This sense of our own nothingness may turn into a perception of sinfulness in yourself, but it doesn't have to. This may link to James' distinction between healthy-minded religion and morbid-minded religion. It also links to the idea of God's necessary existence.
Sense of unworthiness and need for "covering": There is a feeling of being unworthy to be in the presence of the numen - we need what Otto calls a "covering" so that we feel we are "no longer unfit to relate to the numen". We may close our eyes, cover our heads, take off shoes, kneel or show other acts of respect.
Probably nothing captures the idea of the numinous better than the scene in Raiders of the Lost Ark (1981) where the Nazis open the Ark of the Covenant. Indy (who's clearly read Otto) tells Marion to close her eyes.
Analogies: C.S. Lewis, Tigers & Ghosts

no one is primarily afraid of what a ghost may do to him, but of the mere fact that it is a ghost. It is "uncanny" rather than dangerous, and the special kind of fear it excites may be called Dread. With the Uncanny one has reached the fringes of the Numinous.

Now suppose that you were told simply "There is a mighty spirit in the room," and believed it. Your feelings would then be even less like the mere fear of danger: but the disturbance would be profound. You would feel wonder and a certain shrinking... This feeling may be described as awe, and the object which excites it as the Numinous - C.S. Lewis

The numinous is something that fascinates us: we are attracted to it, want to see it and know more about it. However, it also repels us, makes us want to turn away, cover our eyes, hide behind the sofa. Rather like young children watching Doctor Who. However, we aren’t frightened because the numinous is dangerous, but because it is incomparably greater than us, makes us feel small and insignificant, makes us feel unworthy or fragile, reminds us of our mortality, perhaps. In the presence of the numinous, we know what we shall die one day.
Literature: Kenneth Grahame & the god Pan
Another excellent account of someone experiencing the numinous comes in (odd though it may seem) the central chapter of Kenneth Grahame's The Wind in the Willows (1908) called "The Piper at the Gates of Dawn", when the Rat and the Mole meet the Pan, the god of the animals.

Then suddenly the Mole felt a great Awe fall upon him, an awe that turned his muscles to water, bowed his head, and rooted his feet to the ground. It was no panic terror— indeed he felt wonderfully at peace and happy— but it was an awe that smote and held him and, without seeing, he knew it could only mean that some august Presence was very, very near.

Here is the word "awe" being used in the way Otto uses it: Mole is paralysed and at the same time terrified yet happy. In the presence of their god, both animals share the same numinous experience: 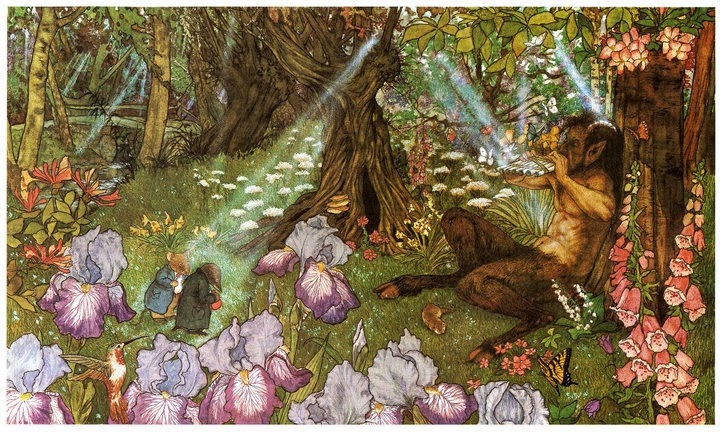 Grahame's description of a numinous religious experience - a theophany, in fact, tucked away in a children's book! - is so intense it inspired the rock band Pink Floyd to name their first album after it.
The Numinous in Religion
The Bible often uses the expression "the fear of God", not as a bad thing, but as a positive experience - this is the numinous.

The fear of the Lord is the beginning of Wisdom - Proverbs 9:10

When Moses encounters God in the burning bush, he is told

Remove the sandals from your feet, for the place where you stand is holy ground - Exodus 3: 5

This is the need for covering in the presence of the numen.

These feelings are expressed in the Christian prayer known as the Sanctus which is recited or sung in church:

Holy, holy, holy, Lord God of power and might, heaven and earth are full of your glory

The idea of God as "wholly other" is expressed in another prayer, the Gloria:

Has Otto made a significant contribution to the investigation of religious experience?
Powered by