﻿There entire essay is summarised here:
Mackie - summary of text

Introducing the Problem of Evil & Suffering

The Problem of Evil & Suffering is covered in detail in another section of the course. To understand and evaluate Mackie's argument, you need to know the outlines.
Critics of religion have brought up this problem for centuries. An early statement comes from the Greek philosopher Epicurus. 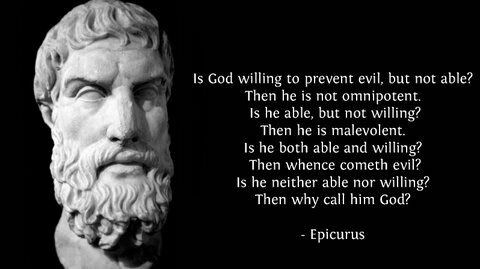 David Hume called it "the rock of atheism". It boils down to an ancient complaint:

WHY DO BAD THINGS HAPPEN TO GOOD PEOPLE?

J.L. Mackie came up with his own formula for the problem, known as the INCONSISTENT TRIAD.
Either:
That sounds great!!! But it's clearly not the world we actually live in... What about the other two?
Both of these involve conclusions that religious believers don't accept - either a God who doesn't want to stop evil (because he doesn't care) or a God who isn't able to stop evil (because he's too weak).
Crash Course Philosophy covers the Problem of Evil & Suffering in 10 minutes; Plantiga's "Freewill Defence" is at 3:40 and Hick's "soul-making" theodicy is at 6:20
Powered by